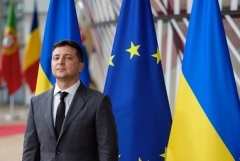 Ukrainian President Volodymyr Zelenskyy stands in front of Ukrainian and European flags, during a visit to Brussels in 2020. (Photo by Thierry Monasse/Getty Images)

(CNSNews.com) – Looking ahead to a week in which the European Union could grant his country “candidate status”, Ukrainian President Volodymyr Zelensky said Sunday evening that Russia would likely increase “the hostile activity” in response.

“Tomorrow, a truly historic week begins, a week when we will hear the European Union’s response to Ukraine’s candidate status,” Zelenskyy said in his daily video message to the nation.

He noted that the EU’s Executive Commission on Friday gave its approval to place Ukraine on a path to membership, ahead of a decision by the bloc’s 27 leaders at a summit later this week.

“I think it is obvious to everyone that since 1991 there have been few decisions as fatal for Ukraine as what we now expect,” he said, referring to the year in which Ukraine regained its sovereignty after the fall of the Soviet Union.

“And I am convinced that only a positive decision meets the interests of all of Europe.”

Zelenskyy said he would use the days leading up to the EU summit to build support for a decision in favor of Ukraine.

He predicted that as the EU considers Kyiv’s bid to join the bloc, “obviously we should expect more hostile activity from Russia – deliberately, demonstratively, this week exactly.”

“And not only against Ukraine,” he continued, “but also against other European countries. We are preparing. We are ready. We warn [our] the partners.”

Ukraine applied to join the EU on February 28, four days after Russian President Vladimir Putin announced the start of a “special military operation” against the neighboring country.

A few days earlier, Putin had recognized two separatist regions in the eastern region of Donbass as “independent”, and it was towards this region that the Russian military campaign was diverted after failing to seize Kyiv, and where the fighting remains concentrated almost three months later.

The invasion sparked a strong collective response from the West, with the EU and US imposing multi-tiered sanctions on Moscow and providing billions of dollars in military assistance to Kyiv.

(The three also expressed support for Moldova’s application for candidate status, which came several days after Ukraine’s application, and was also prompted by the Russian invasion.)

Specifically, the leaders of the EU’s three most powerful economies have signaled their approval for Ukraine to receive candidate status – not for the fast-track membership that Zelenskyy has demanded.

It took a decade or more for other former communist countries in Eastern Europe to be admitted to the EU, and Macron and Scholz in particular sought to drown out expectations of an accelerated process for Ukraine. .

In contrast, the leaders of eight of the countries that joined the EU after the collapse of the Soviet Union – Bulgaria, the Czech Republic, Estonia, Latvia, Lithuania, Poland, Slovakia and Slovenia – gave their early support to Kyiv’s call for rapid accession. .

Although Hungary, which disagreed with some of its partners over the bloc’s approach to the war, did not join the eight, it later confirmed its support for the initiative.

For Ukraine to receive candidate status, all 27 leaders must agree.

“The EU is not a military organization or a military-political bloc, unlike NATO,” Putin told the St. Petersburg International Economic Forum on Friday, in response to a question.

At the same time, Putin said Ukraine was mistaken if it thought EU membership would revive its industrial base, especially its once-thriving shipbuilding or aircraft manufacturing sectors. That would be unlikely, he said, because major EU countries would not want to “create competitors”.

The Kremlin fiercely opposes Ukraine – or Georgia – joining NATO, and the alliance has deferred the issue of putting the two former Soviet states on a path to membership over the past few years. last 14 years.