The United Nations High Commissioner for Human Rights, Michelle Bachelet, announced at a meeting on Monday that she would not seek to continue in the post after her term expires in August, a decision handed down public shortly after international calls for his resignation following a visit to China in which Bachelet praised the Communist Party for its alleged human rights successes.

Eyewitness accounts, academic studies, satellite evidence and other forms of data have revealed that China has imprisoned millions of non-Han ethnic minorities in concentration camps, forcibly sterilized countless numbers of women for prevent the growth of non-Han populations and enslaved at least hundreds of thousands in cotton fields and factories.

Bachelet issued a final statement shortly before leaving China in which she did not use the word “genocide” or address these concerns, instead praising the Chinese government for its “tremendous achievements”. Bachelet claimed that the Communist Party had closed all of its concentration camps for ethnic minorities, using the government’s preferred euphemism for the facilities: “vocational education and training center”.

Before heading the UN’s human rights office, Bachelet served as far-left socialist president of Chile, where she invested heavily to make Chile economically dependent on China. China is currently Chile’s largest trading partner, according to the World Bank.

Bachelet announced that she would no longer hold office once her term ended at the end of her update to the Human Rights Council on the activities of her office on Monday.

“As my mandate as High Commissioner draws to a close, the landmark fiftieth session of this Council will be the last I report on,” Ms. Bachelet announced.

The human rights chief did not elaborate on his comment.

The UN Secretary General appoints the High Commissioner for Human Rights, with approval authority given to the General Assembly, for a maximum of two four-year terms. Bachelet could choose to seek approval for another four years, giving a maximum duration of eight years.

Without specifying his remark, Bachelet concluded by urging the members of the widely discredited Human Rights Council to “continue to seek dialogue, to be willing to listen to each other, to understand the respective points of view and to work actively to identify common ground, as preconditions for finding lasting solutions to the challenges that threaten us all.

Elsewhere in his remarks on Monday, Bachelet updated the UN on his activities around the world since the last session of the Human Rights Council, including his trip to China. Much like in his remarks from China, Bachelet did not address the ongoing genocide in China, generally promising that “his office’s assessment of the human rights situation in Xinjiang is being updated. “.

“We had discussions about specific human rights concerns,” Bachelet said, referring to interviews with Chinese Communist Party officials, “including human rights violations in the context of China’s counter-terrorism policies and safeguarding national security, protection of the rights of ethnic and religious minorities, judicial and legal protection, including for women, human rights in the digital space, and business and human rights”.

“I also raised my concerns about the human rights situation of Uyghurs and other predominantly Muslim minorities in Xinjiang,” Bachelet said Monday, “including widespread arbitrary detention and patterns of abuse, both in the VETC system and in other detention facilities”.

Bachelet revealed that the Chinese government would review his office’s assessment of Xinjiang “for factual comment” before the public is allowed to see it.

The human rights chief also appeared to justify genocide by echoing the Chinese government’s assertion that genocide is necessary to combat terrorism.

“Terrorism is a scourge that unites us all in horror and the commitment to fight it,” Bachelet said. “But there can only be success in the fight against terrorism if, in doing so, we fully respect the values ​​we stand for.”

Bachelet did not devote most of his speech to China. Much of it focused on “sustainable development” and climate change provisions, which she defined as part of human rights, as well as listing several countries that, according to her, were concerned about their human rights situation. Bachelet made special remarks about the US – calling the growing pro-life movement a threat to the “essential right” to abortion – the UK and Israel.

Bachelet was facing numerous calls for her resignation shortly before announcing that she did not intend to seek a second term. Uyghur advocacy groups, in particular, have condemned Bachelet and the United Nations in general for failing to condemn the genocide facing the ethnic population. 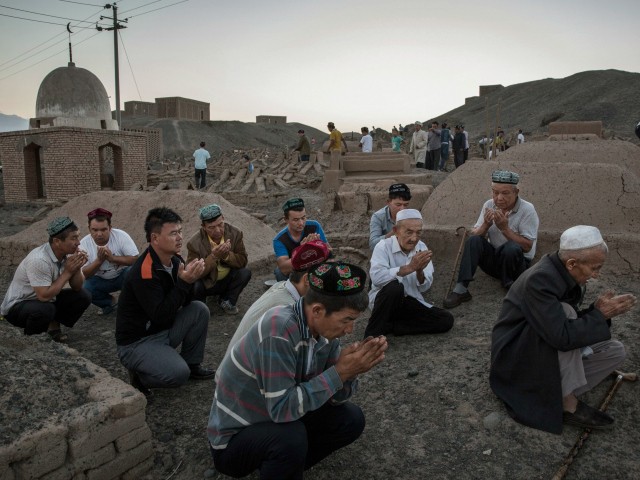 Uyghur men perform prayers for their ancestors at a cemetery ahead of the Corban festival in Turpan county in China’s far western Xinjiang province (Photo by Kevin Frayer/Getty Images).

“The high commissioner has disgraced himself and his office by refusing to investigate the Chinese genocide and by adopting, repeating the Chinese regime’s narrative, further cementing its propaganda at the UN,” the executive director said. of Campaign for Uyghurs, Rushan Abbas, shortly after Bachelet’s visit.

Bachelet “showed us that no one cares about our human rights and that restoring the independence of East Turkestan is the only solution to end the ongoing genocide and guarantee the very existence and freedoms of our peoples”, said Salih Hudayar, Prime Minister of the East Turkestan government. -in exile, said in response to the UN official’s assessment of the situation in the region.

Bachelet angered the human rights community twice during his trip to China. On one occasion, Bachelet held a virtual meeting with dictator Xi Jinping during which, rather than condemning him for the widely documented human rights abuses he orchestrated, Bachelet praised Xi for his record. China on human rights. The Chinese Communist Party, a far from impartial source, published paraphrased remarks by Bachelet, but she did not dispute them.

“Ms. Bachelet thanked China for having received her visit despite the [Chinese coronavirus] challenge, the first visit to China by the UN High Commissioner for Human Rights in 17 years,” according to the Chinese Foreign Ministry, which added:

She expressed her admiration for China’s efforts and achievements in eradicating poverty, protecting human rights and achieving economic and social development, and commended China’s important role in defense of multilateralism, the fight against global challenges such as climate change and the promotion of sustainable development in the world.

In a video address from Guangzhou, China, Bachelet also praised China for its so-called “achievements” in human rights after visiting East Turkestan.

“Reducing poverty and eradicating extreme poverty 10 years ahead of its target date are huge achievements of China,” Bachelet said of his visit to East Turkestan. “The introduction of universal health care and [an] an almost universal unemployment insurance scheme goes a long way towards ensuring the protection of the right to health and broader social and economic rights.

The former Chilean president added that she had visited a “vocational education and training center” (concentration camp) and that the communist regime had assured her that the camps had been dismantled.

During Bachelet’s visit to East Turkestan, researcher Adrian Zenz and the Victims of Communism Memorial Foundation released a huge dump of documents dubbed the ‘Xinjiang Police Files’ showing hundreds of ‘identification photos’ of victims concentration camps, photos of police training to suppress Uyghurs, and speeches by senior officials indicating that Xi personally orchestrated the genocide. Bachelet has yet to respond to the revelation as of press time.