A Briton captured by Vladimir Putin’s forces in Ukraine has been filmed singing the Russian national anthem weeks after he was sentenced to death.

Aiden Aslin is unshaven and has short hair as he sings “The National Anthem of the Russian Federation” in a small room with barred windows and a table in the middle.

The 28-year-old, from Newark in Nottinghamshire, wears blue tracksuit bottoms and a red shirt over a red t-shirt as he sings the anthem for around two minutes.

He stands next to former US police officer John Dougan, who moved to Russia in 2016 and is now believed to be a prominent conspiracy theorist helping to spread pro-Moscow misinformation online.

In the video, which was shared by Russia Today reporter Roman Kosarev on the Telegram messaging app on Friday, Mr Dougan nods and smiles throughout the rendition.

He then applauds once Mr Aslin has stopped singing and tells him the performance was “amazing”.

In a message accompanying the video, Mr Kosarev said Mr Aslin’s cellmates told him he had a talent for singing after hearing his rendition of the anthem.

Mr Dougan then reportedly asked Mr Aslin if he would be happy to sing the anthem on camera.

“He accepted with pleasure, and that’s what happened,” adds Mr. Kosarev.

Sky News chose not to show the video.

A former caregiver joined the Ukrainian Armed Forces in 2018

Mr Aslin is one of two British men who were sentenced to death by a Russian-backed tribunal in June after fighting in Ukraine.

The former care home worker and Shaun Pinner, 48, have been accused of being mercenaries.

Mr Aslin joined the Ukrainian Armed Forces as a Marine in 2018 and applied for citizenship.

He also has a Ukrainian fiancée.

The British fighter said ‘God will be the one to judge me when the time comes’ after being sentenced to death.

“The New Reality Has Begun” – listen to Ukraine War Diaries 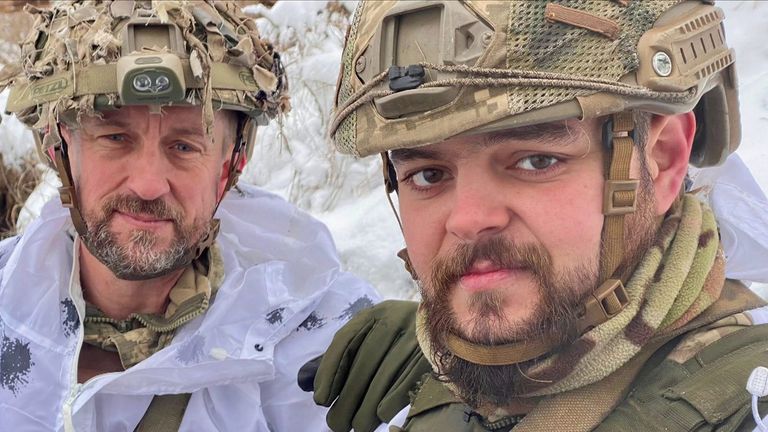 The Ministry of Foreign Affairs criticizes the “fictitious judgments”

Mr Aslin and Mr Pinner were captured in Mariupol in April during the intense struggle for control of the Ukrainian port city, before appearing in court in the Donetsk People’s Republic (DPR) – a pro-Russian breakaway region self-proclaimed in eastern Ukraine.

They were found guilty of “mercenary activities and actions aimed at seizing power and overthrowing the constitutional order of the DPR”, according to the Russian news agency Interfax.

The UK Foreign Office sees the verdicts as “fictitious judgments” and supports the families of Mr Aslin and Mr Pinner.

The men say they served in regular military units in Mariupol and should therefore be protected as prisoners of war by the Geneva Convention.

Mr Aslin’s family said in a statement after the verdicts that the pair were not mercenaries and needed time to “take it all in”.

He continues, “We love Aiden with all of our hearts. He and Shaun, as members of the Ukrainian Armed Forces, should be treated with respect like any other POW.

They said they hoped the conviction would be overturned and they called on the British and Ukrainian governments to “do everything in their power to get them back to us safe and sound and quickly”.

He added: “We can only imagine what they’re going through right now. It’s a very upsetting development.”