This story was last updated at 15:36 UTC/GMT

“I welcome that Sweden has already started to change its counterterrorism legislation and that Sweden will ensure that the legal framework for arms export will reflect their future status as a NATO member with new commitments to allies,” NATO Secretary-General Jens Stoltenberg said during a meeting with Swedish Prime Minister Magdalena Andersson on Monday.

The move from Sweden is seen as an attempt to placate Turkey which has so far blocked an attempt by both Sweden and Finland to join the alliance.

However, Stoltenberg added that Sweden “is in a better place now” in terms of security given that several NATO members had given assurance to protect Sweden during its application process.

The Azot chemical plant, where hundreds of civilians from the embattled town of Sievierodonetsk have sought refuge, has come under fire from Russian artillery, regional governor Serhiy Haidai said on Monday.

Russian forces have also made advances in the city, now controlling about 70% according to Haidai.

“Russians continue to storm the city, having a significant advantage in artillery they have somewhat pushed back the Ukrainian soldiers,” he said on social media.

“About 500 civilians remain on the grounds of the Azot plant in Sievierodonetsk, 40 of them are children. Sometimes the military manages to evacuate someone,” the regional governor added.

“Being straightforward — to end the war we need heavy weapons parity,” he wrote on Twitter.

The capture of Sievierodonetsk would open up the way for Russian troops to advance on other key towns in the region.

Ukrainian forces are fighting for “every town and village where the occupiers came,” Ukrainian President Volodymyr Zelenskyy said on Monday.

“We are once again fighting for it and all of Ukraine,” he added. His comments came during a ceremony to commemorate the recapture of Mariupol in 2014 from Russian forces.

The Ukrainian government has suspended exports of fossil fuels due to the Russian invasion.

A resolution published on the government’s website on Monday said that the export ban was connected with “the armed aggression of the Russian Federation against Ukraine and the imposition of martial law in Ukraine.”

The International Energy Agency estimates that Ukraine had around 9 billion tonnes of oil equivalent in fossil fuel reserves before it lost access to Crimea, following Russia’s occupation in 2014.

Ukraine’s Chief of Police Ihor Klymenko told the news agency Interfax Ukraine on Monday that more than 12,000 civilians have been killed since Russia invaded the country on February 24.

Three-quarters of the victims were men, another 23% were women and 2% were children, he said. Some 1,200 have not yet been identified.

“These are civilians, these people had nothing to do with the army or law enforcement,” Klymenko told Interfax Ukraine.

According to the UN’s own tally, there have been 4,300 officially recorded civilian deaths since the war began, however, this number is lower due to their high standards of death confirmation.

The UK Ministry of Defence says it expects Russia’s river-crossing operations to be one of “the most important determining factors” in the war over the coming months.

The ministry reports that for Russia to make gains in the central sector of its frontline in Donbas, its forces must be able to carry out “ambitious flanking actions” or conduct river crossings under fire.

The British report says Ukrainian forces have managed to demolish bridges before making withdrawals. It also notes that Russian forces have “struggled to put in place the complex coordination necessary to conduct successful, large-scale river crossings under fire.”

Finnish President Sauli Niinisto has said that according to the latest intelligence, both Russia and Ukraine were using heavier weapons than before in the most recent stages of the war. In Russia’s case, Niinisto said during security policy talks, this meant thermobaric bombs.

“We are supporting Ukraine with increasingly heavy weaponry. And on the other hand, Russia has also begun to use very powerful weapons, thermobaric bombs that are in fact weapons of mass destruction,” Niinisto said.

After decades of declining to join NATO, Finland has recently entered a formal bid to join the alliance due to concerns of aggression from its eastern neighbor following the invasion of Ukraine.

German government spokesman Steffen Hebestreit has refused to comment on media reports implying that Chancellor Olaf Scholz may visit Kyiv as part of a contingent of European leaders traveling to the Ukrainian capital this Thursday.

Hebestreit said he could “not confirm” reports from Italian daily La Stampa and Germany’s Bild am Sonntag that Scholz would be joining Italian Prime Minister Mario Draghi and French President Emmanuel Macron.

Scholz has not been to Kyiv since the war began, a decision that has garnered criticism at home and abroad, even as he has sent high-level deputies such as Foreign Minister Annalena Baerbock.

The decision not to travel to Ukraine has also been part of accusations that Berlin is not showing adequate leadership in the face of a crisis after Scholz’s caution in supplying Ukraine with heavy weapons.

Germany’s exports to Russia in April were down 64.1% compared to the same month last year, the government’s statistics agency said in figures published on Monday.

This is because of the EU sanctions imposed in light of the conflict, hitting core exports like machinery and chemical products.

Meanwhile, the value of German imports from Russia rose markedly. This is not because of an increase in the volume of exports, but rather as a result of the rapidly rising prices of natural gas and oil.

Russia earned €93 billion ($98 billion) from fossil fuel exports during the first 100 days of its war in Ukraine, according to a report released Monday by the Center for Research on Energy and Clean Air.

The European Union accounted for 61% of that, worth about €57 billion, according to the Finland-based organization.

The top importing countries were China at €12.6 billion, Germany at €12.1 billion, and Italy at €7.8 billion. India, which has upped imports of cheap Russian oil since February, ranked eighth, at €3.4 billion.

The European Union last month agreed to block Russian oil imports by the end of 2022. The bloc also says it aims to reduce gas shipments by two-thirds this year as well although it’s yet to formalize this at all.

Canadian Foreign Minister Melanie Joly said Monday it was “unacceptable” for a Canadian official to have attended Sunday’s Russian National Day celebrations at the country’s embassy in Canada.

Yasemin Heinbecker, a deputy protocol chief in Canada’s Global Affairs department, attended the event with representatives of Egypt, Pakistan and some African countries, The Globe and Mail newspaper reported.

Russia Day takes place on June 12 each year, the anniversary of the official formation of modern-day post-Soviet Russia in 1990.

“The situation in terms of the humanitarian crisis is very, very difficult. But Ukrainian armed forces are still in control of the industrial part of Sievierodonetsk,” Sak said. 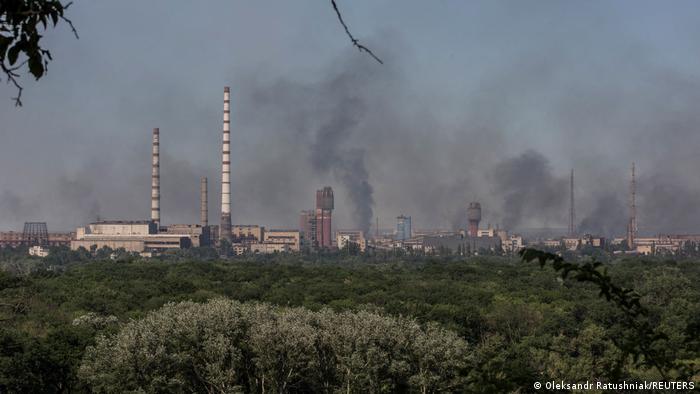 The Azot plant in Sievierodonetsk is still under Ukrainian control, according to defense ministry advisor Yuri Sak

“Another one of Russia’s blitzkrieg has failed because of the resistance and resilience of the Ukrainian armed forces,” the advisor said.

“It’s a situation of street-to-street fighting. The Ukrainian army is even counter-attacking in some places,” Sak said, adding that this could be done more efficiently the faster Ukraine receives heavy weapons.

Ukraine has received NATO-standard 155 mm artillery systems, but needs more, according to Sak.

Amnesty International has accused Russia of war crimes in the northeastern Ukrainian city in Kharkiv.

The organization said that attacks in Kharkiv killed hundreds of civilians.

“The repeated bombardments of residential neighborhoods in Kharkiv are indiscriminate attacks which killed and injured hundreds of civilians, and as such constitute war crimes,” the rights group said in a report. “This is true both for the strikes carried out using cluster (munitions) as well as those conducted using other types of unguided rockets and unguided artillery shells.”

Amnesty said that it had uncovered proof of the repeated use of 9N210 and 9N235 cluster bombs and scattered land mines by Russian forces. Such weapons are banned under the 2008 Convention on Cluster Munitions (CCM), which 110 countries have joined.

While neither Russia nor Ukraine are parties to the CCM, they are obliged to respect a ban on inherently indiscriminate weapons that forms part of customary international humanitarian law.

“The continued use of such inaccurate explosive weapons in populated civilian areas, in the knowledge that they are repeatedly causing large numbers of civilian casualties, may even amount to directing attacks against the civilian population,” the report said.

Russian forces said they struck an arms depot in the town of Chortkiv in Ukraine’s western Ternopil region.

The weapons at the site were US and EU-supplied, according to Russian forces.

Ternopil regional governor Volodymyr Trush said that the strike left 22 people injured. A military installation and four residential buildings were damaged in the strike, according to Trush. 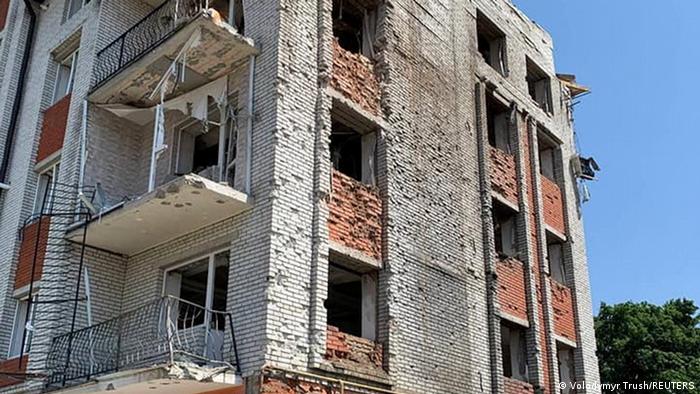 “This strike made no tactical or strategic sense, just like the absolute majority of other Russian strikes. It is terror, just terror,” Ukrainian President Volodymyr Zelenskyy said of the strike on Chortkiv.

Russian strikes in western regions of Ukraine are rare compared to the country’s east, where fierce fighting rages between Ukrainian and Russian forces.

Russian forces have blown up a bridge linking the eastern city of Sievierodonetsk to neighboring Lysychansk, local officials said.

Lysychansk lies southwest of Sievierodonetsk on the other side of the Siverskyi Donets river. The destruction of the bridge has cut off a possible evacuation route for civilians. Only one of three bridges is still standing.

Sievierdonetsk has become the site of some of the fiercest fighting over Ukraine’s eastern Donbas region. Luhansk regional governor said that Ukrainian and Russian forces are still fighting street-by-street in Sievierdonetsk.

“The key tactical goal of the occupiers has not changed: they are pressing in Sievierodonetsk, severe fighting is ongoing there — literally for every meter,” Ukrainian President Volodymyr Zelenskyy said in his nightly video address

What happened in Russia’s invasion of Ukraine on Sunday

Denis Pushilin, the leader of the pro-Russian separatist Donetsk region, said Sunday he would not alter the death sentences handed to two Britons and a Moroccan for fighting with the Ukrainian army.

The UK Defense Ministry said Russia was using its overmatch in force ratio and artillery to “gradually seize territory in and around Sievierodonetsk” from Ukrainian control.

Ukraine’s deputy foreign minister said the country was exporting grain through Poland and Romania rather than by sea, but that bottlenecks had slowed the supply chain.

The number of Ukrainian refugees entering into Poland passed the four-million mark. It is impossible to say how many of the incoming refugees have stayed in Poland and how many have traveled further into Europe.

The replacement for McDonald’s in Russia opened its first 15 restaurants in Moscow. The company said the new name of the chain, “Vkusno & tochka” means “Tasty & that’s it.”

Serhii Haidai, the governor of the Luhansk region, said Ukraine remained in control of the Azot chemical plant in Sievierodonetsk, where hundreds of civilians are said to be sheltering.

You can revisit our updates from Friday, June 10, here.