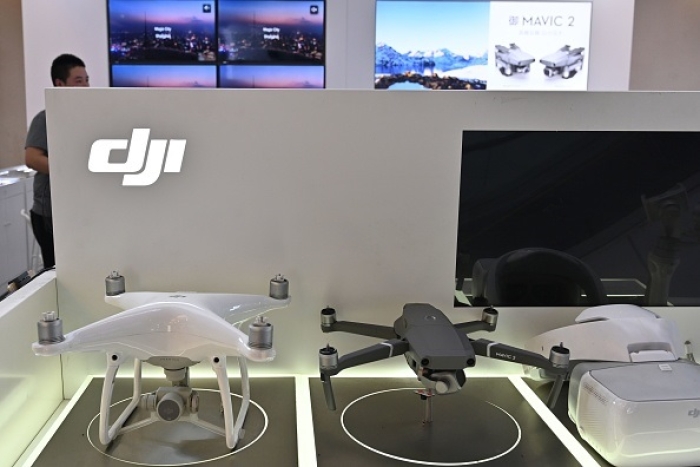 DJI drones are seen at a DJI store in Shanghai. (Photo credit should read HECTOR RETAMAL/AFP via Getty Images)

(CNSNews.com) – “Let’s talk about China for a moment,” said Senator Rob Portman, a senior member of the Senate Homeland Security Committee, during a hearing on the threat posed by unmanned aircraft systems or drones.

He’s concerned about the FBI and other federal agencies buying Chinese-made drones — apparently, for good reason:

Portman noted that last week FBI Director Chris Wray and the head of Britain’s MI5 identified China as one of the greatest threats to national security and economic prosperity in the West.

“Stealing our technology, dominating our markets, and they talked about the U.S. drone market,” Portman said.

“And they talked about the use of drones. Here’s an example. According to a Washington Post report, China’s DJI is the top supplier of drones to US law enforcement, they say.

“DJI has servers in China. They have the support of the Chinese government. The Chinese State Security Service is one of their customers. Here is our own Commerce Department saying that DJI has been blacklisted by export last year after Bloomberg reported that it was supplying surveillance technology to Chinese security forces in Xinjiang, where millions of Uyghur Muslims have been forced to live in internment camps.

“So there’s a report that last year the Secret Service bought eight of DJI’s drones. The FBI bought 18 of them. So let me ask you these questions about – officially. Start with Mr. Wiegmann. Does the FBI currently buy and use Chinese-made drones? Yes or no,” Porter said.

“We do,” said Wiegmann, who is an assistant deputy attorney general in the Justice Department’s National Security Division.

“Do you buy DJI drones? Yes or no,” Portman interrupted.

“So you are,” Portman said.

Vinograd said she would give more specific details in a closed hearing.

“Okay. But the answer is yes,” Portman said.

A Federal Aviation Administration official who also testified Thursday said the FAA does not purchase drones, but tests them.

Portman said he finds it hard to believe that Congress needs to write legislation prohibiting US government agencies from buying Chinese-made drones, especially when the servers are in China and the Chinese government is co-owner of the drone. company that makes them.

“If we can’t get this legislation passed, would you all support the inclusion of this type of legislation in everything we do in terms of reauthorization? Mrs Vinograd? said Portman.

“I share your concerns about these drones and would welcome a conversation about specific language, sir, yes,” Vinograd said.

“We want to get away from using Chinese drones. And the FBI is working and other parts of the DOJ are working to — on that goal. Right now they kind of dominate the market, so we’re working to move our – our use of drones away from Chinese drones towards other alternatives.

“In the meantime, the FBI is taking steps to conduct thorough cybersecurity and supply chain reviews to ensure that any risk posed by the use of technology is mitigated. But we want to move away from that. And so we – we definitely support the – – the objectives of the authors of the bill.

“We have – I think we have provided technical assistance and technical issues on things that we would need – changes that we could make – to the bill to make sure that we could – could support it and it could lead our mission in accordance with the provisions.

“But we share the goals of moving away from these drones and using other alternatives that don’t pose the same kind of supply chain risk.”

Portman made it clear that his concern goes beyond the supply chain. He mentioned “the potential threat to national security of this information being relayed to China and used against us.”