Despite surging at the end of Alabama’s U.S. Senate Republican primary last month to make the runoff, Trump opted to endorse the former President and CEO of the United States Business Council. ‘Alabama, Katie Britt, rather than Brooks. 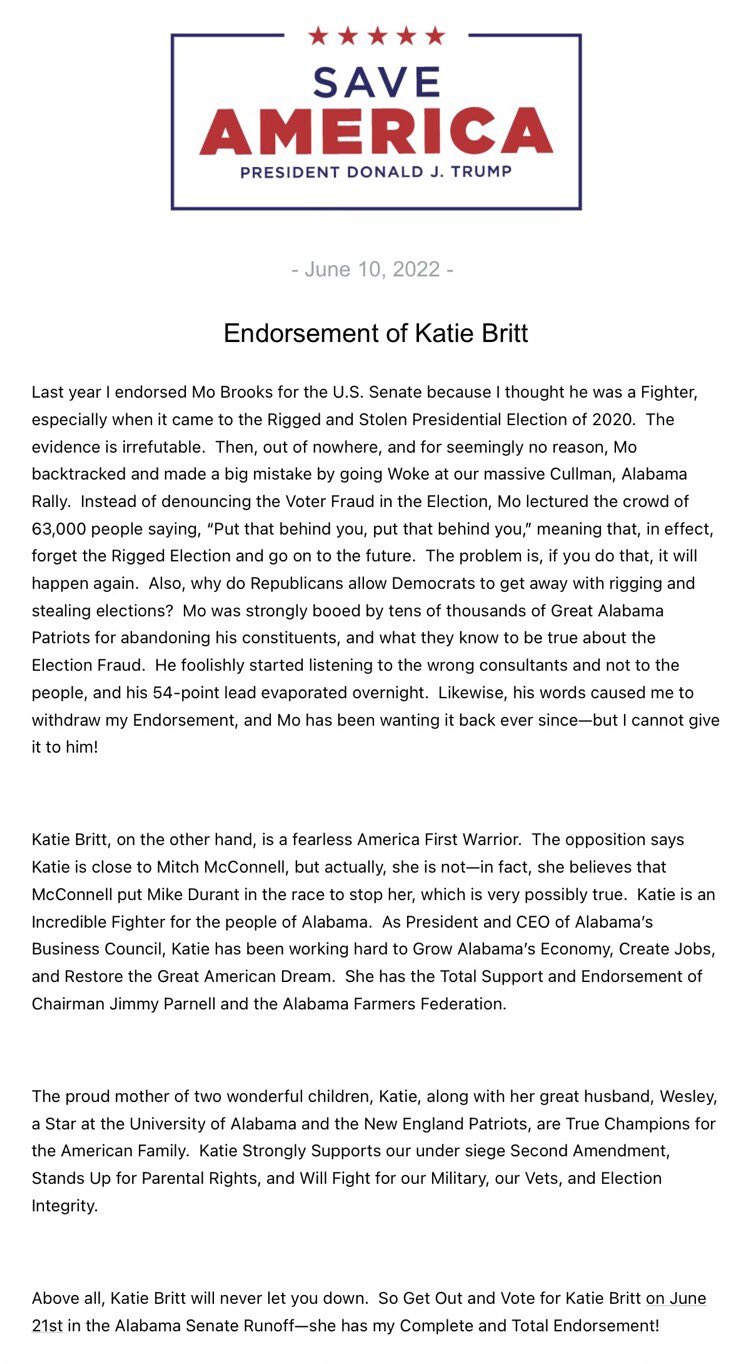 Last year, I backed Mo Brooks for the US Senate because I thought he was a fighter, especially when it came to the rigged and stolen 2020 presidential election. The evidence is irrefutable. Then, out of nowhere, for no reason, Mo backtracked and made a big mistake waking up on our massive Cullman, Alabama rally. Instead of exposing election fraud in the election, Mo lectured the crowd of 63,000 by saying, “Put that behind you, put that behind you,” which basically means forget about rigged elections. and move on to the future. The problem is that if you do this, it will happen again. Also, why are Republicans allowing Democrats to rig and steal elections? Mo has been heavily booed by tens of thousands of Great Alabama Patriots for abandoning his constituents and what they know to be true about voter fraud. He foolishly started listening to bad consultants and not people, and his 54-point lead evaporated overnight. Likewise, his words caused me to withdraw my endorsement, and Mo has wanted it back ever since – but I can’t give it to him!

Katie Britt, meanwhile, is a fearless America First warrior. The opposition say Katie is close to Mitch McConnell, but in fact she isn’t – in fact, they think McConnell put Mike Durant in the running to stop her, which is most likely true. Katie is an incredible fighter for the people of Alabama. As President and CEO of the Business Council of Alabama, Katie worked hard to grow Alabama’s economy, create jobs, and restore the great American dream. She has the full support and endorsement of President Jimmy Parnell and the Alabama Federation of Farmers.

The proud mother of two wonderful children, Katie, along with her great husband, Welsey, a star for the University of Alabama and the New England Patriots, are true champions for the American family. Katie strongly supports our Second Amendment under siege, defends parental rights, and will fight for our military, vets, and election integrity.

Above all, Katie will never let you down. So get out there and vote for Katie Britt on June 21st in the Alabama Senate runoff – she has my complete and total approval!

Earlier in the day, an Alabama Forestry Association poll conducted by McLaughlin & Associates gave Britt an 18.2% lead over Brooks without Trump’s endorsement.

“I am grateful to have President Trump’s endorsement and strong support,” Britt said in a statement. “President Trump knows that Alabamians are tired of failed and inactive career politicians. It’s time for the next generation of conservatives to step up and shake things up in Washington to save the country we know and love for our children and our children’s children. In the Senate, I will fight to uphold Alabama’s conservative Christian values, advance the America First agenda, and preserve the American Dream for generations to come.