Chinese President Xi Jinping was in the eastern region of Xinjiang, state media reported on Friday, for what he believed to be his first visit to the region since launching a crackdown on the Uyghur minority that has been branded a “genocide” by Western countries. .

The president inspected the Xinjiang Production and Construction Corps (XPCC), a supra-governmental organization under US sanctions, and hailed its “great strides” in reform and development.

Documents leaked in May and found to be credible highlighted the mass detentions of more than a million Uyghur Muslims in “re-education camps”, along with a litany of other human rights abuses.

Two-day visit to the “hub” region

The Chinese president was in the Xinjiang capital of Urumqi on Tuesday before heading to the city of Shihezi on Wednesday, the official Xinhua news agency reported.

Xi called the region a “core area and hub” of China’s “Belt and Road” infrastructure and influence initiative, which aims to build ports, railways and power plants to better connect the Chinese economy to Central Asia and Eastern Europe.

The Chinese leader met with XPCC leaders and “learned about XPCC’s history in cultivating and protecting border areas”, Xinhua reported. The XPCC operates its own courts, schools and health systems in Xinjiang.

He also reportedly called for better preservation of the cultural heritage of minority groups, US news site Bloomberg reported. 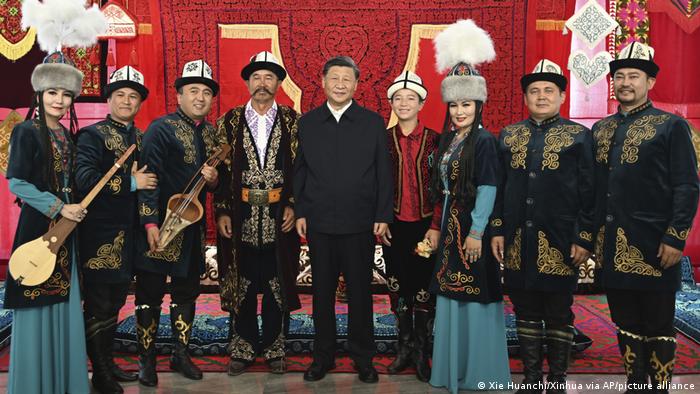 His visit comes after a trip to Hong Kong – his first trip outside mainland China since the start of the COVID-19 pandemic and his first time in Hong Kong since 2017.

Beijing has also been criticized for its brutal crackdown on pro-democracy protesters following the implementation of a new Basic Law that rolled back privileges the city had enjoyed since returning to China from British rule.

China has dismissed accusations of genocide and human rights abuses against Uyghurs in Xinjiang, calling them an attempt by the United States and other Western countries to smear China’s economic rise.

Documents have shown that millions of Uyghurs have been forced to learn Mandarin Chinese and abandon their cultural traditions. Beijing claims that these camps are vocational centers and voluntary training facilities.

Several major companies have pulled out of the region amid international criticism, although German car giant Volkswagen has defended the continued operation of its joint venture factory.