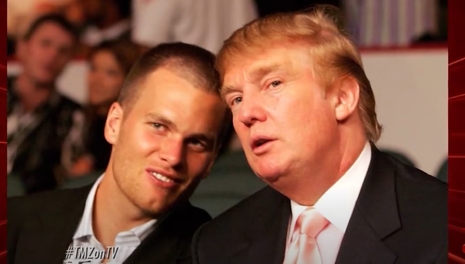 Let’s get things straight. Now we’re led to believe that Tom Brady never really wanted Donald Trump to make America great again. The media has misrepresented the former quarterback’s relationship with the former president, Brady says, and please ignore the old photo of a MAGA hat in his locker.

Brady said in an interview with Variety magazine that, unlike former President Trump, his personality is not one to insult people. His first encounter with Trump was when he was 26 on a private golf course, and he thought it was “the coolest thing in the world.”

The fake news portrayed Brady as a Trump supporter after the MAGA hat took up residence in the Patriots locker room in 2015, but now he says it was all overblown. He is never Trumper! :

Brady is obviously a chameleon whose loyalties have changed over time, thanks to the help of media pressure. The media has poisoned the former president throughout his four years in office and falsely insists he instigated the Capitol Riot on January 6, 2021. It just doesn’t look right. for a hip former athlete to be a fan of Trump.

In 2015, Brady called his MAGA hat “sort of” supportive of Trump’s presidential bid. In 2016, Brady said Trump had “been a friend of mine.” In the same period of time, they had had telephone conversations. And there’s also this photo of them making friends, posted above.

Brady once said, “I always try to keep it in context because for 16 years you know someone before maybe they were in the position they were in. He supported me a lot for a long time. It’s just a friendship. I have a lot of friends. I call a lot of people [on the phone].”

Brady is trying to rewrite history now and also call off his friendship with Trump. He simply follows the flow of anti-Trump media, trying to be politically correct and signal virtue.

After the Tampa Bay Bucs won the 2021 Super Bowl, they visited President Joe Biden at the White House. Brady insulted those who, like Trump, questioned the integrity of the 2020 election. “I think 40% of people still don’t think we won,” Brady said in an effort to appear as PC as possible.

All of Brady’s recent postures make him fully fashionable with the woke and cancel culture crowd. It just doesn’t reshape history or hide its flip-flops.